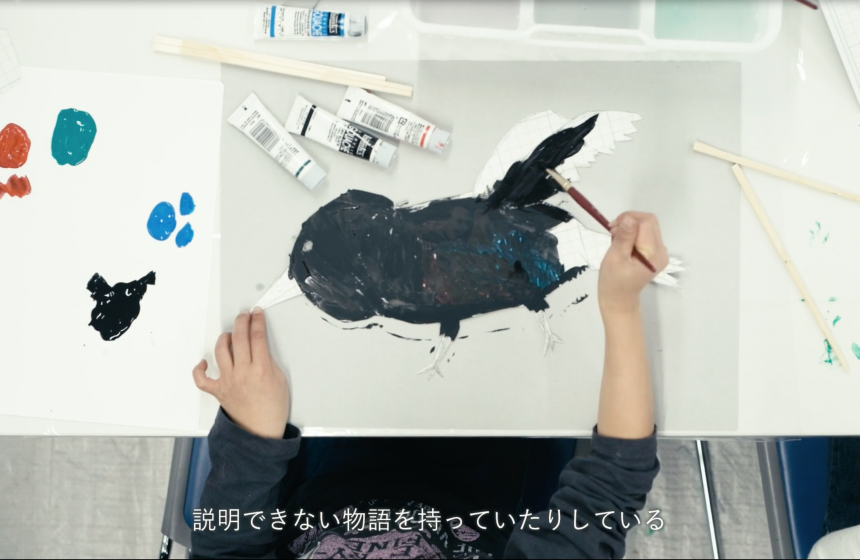 The film shows some scenes from the workshops with artists and children of various personalities that have been held so far, as well as interviews with them. A small taste of the atmosphere. Please take your time to watch the video.

Workshops with children by British artists
‘Translating Cities: find a shape you like and make your own art works!’

A workshop by two contemporary ceramic artists, Eva Masterman and Jackson Sprague, brought to Tokyo as part of a collaborative programme between Camden Arts Centre, a historic arts centre in the UK, and AIT.

The children went out into the city with clay in their hands, found various patterns and shapes in nature and buildings, and moulded them in plaster to create their own original sculptures. It was a day of discovering that familiar landscapes look a little different and that everyday life is full of patterns.

Artists’ workshops with children
‘Let’s create a work of art based on myths from the islands: ‘The Sky and the Snail”.

A workshop with the artist Fumito Urabe, who was born in a Buddhist temple that has been in existence for 500 years and was also educated as a monk, and children.
The children were introduced to creation myths from the southern islands, including ‘Sky and Snail’, in which Sora-kun(Sky), whom everyone thought was the biggest being in the world, and one small snail, a special being who wore the sign of a spiral, had a conversation, which was read out by the children.

They created drawings and three-dimensional sculptures, freely imagining the animals, creatures and landscapes that appear in the myths. While reading the stories passed down from island to island, the children were able to feel the connection between the people who crossed the sea long ago.

Supported by The Nippon Foundation

Each child devised his or her own unique expression while experiencing the mysterious effects of light and shadow and actually making shadow puppets. The story, inspired by the mythical lyric Mahabharata and interwoven with the history of the Kodaira region, was completed as a performance piece incorporating the children’s ideas, and presented in front of a local audience.

Fifth Season and artist workshop ‘Hansel and Gretel and the Big Monkey’ Imagine and express the feelings of the characters from the original fairy tale.

The Fifth Season｜Beautiful Distress is a residency for artists to create artworks and exchange programmes in the vast forest grounds of the Altrecht Hospital, a mental health facility in the province of Utrecht, the Netherlands.

The workshop was held with Esther Vossen (director/curator of Fifth Season), who came from the Netherlands, and artist Masahiro Wada, using an original fairy tale created for children by combining European and Japanese folktales, to imagine the movements of the characters’ hearts and to think about a safe place to live. A workshop was held for children to think about a place where they can feel safe.

Supported by The Nippon Foundation