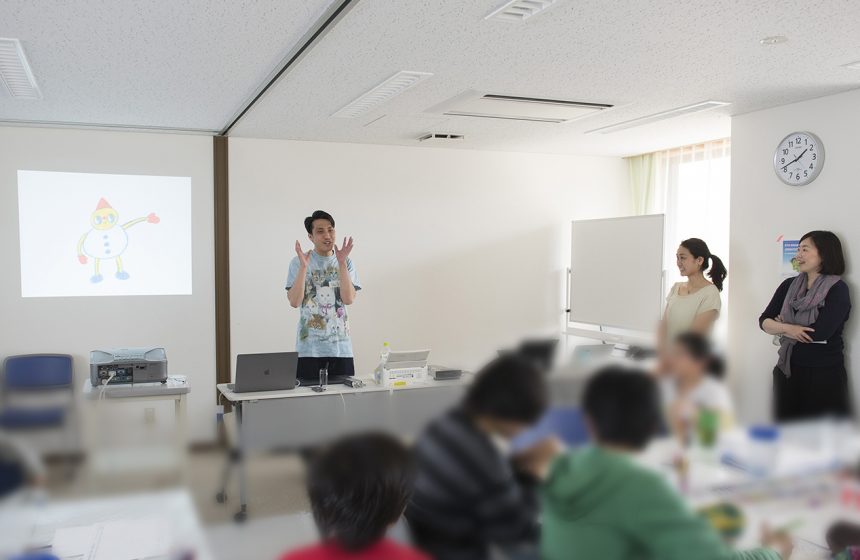 In April 2017, a children’s animation workshop was held at Futaba Musashigaoka Gakuen in Kodaira City, Tokyo, to which visual artist Ryo Hirano was invited as a guest. The completed animation was exhibited at “Haru no Futaba Fes!”, a public event open for local residents organized by Futaba Musashino Gakuen. Futaba Musashigaoka Gakuen is one of 600 children’s homes in Japan. Its residents, the majority of whom are between two to eighteen years of age, are staying there due to difficulties of living at home, either because of illness or absence of parents, or for other reasons. The children commute to nearby schools from this facility, where support is given to prepare them for returning to their homes, as well as for social independence after leaving the facility. Futaba also works to make connections and encourage interaction with the surrounding community. This workshop was also one of a number of collaborative projects realized together with an outside organization.

In April 2017, a children’s animation workshop was held at Futaba Musashigaoka Gakuen in Kodaira City, Tokyo, to which visual artist Ryo Hirano was invited as a guest. Joining the workshop were eleven residents of Futaba Musashigaoka Gakuen who go to elementary, junior and senior high schools, as well as the teachers who are helping them to become socially independent, who gathered there after seeing the workshop poster.

Hirano is an artist who projects a unique sense of the world and create animations by using the stories found in everyday, and make imaginative characters appear in fantastical scenery that is somewhat nostalgic. He has produced animations for TV programs and films as well as music videos and comics. 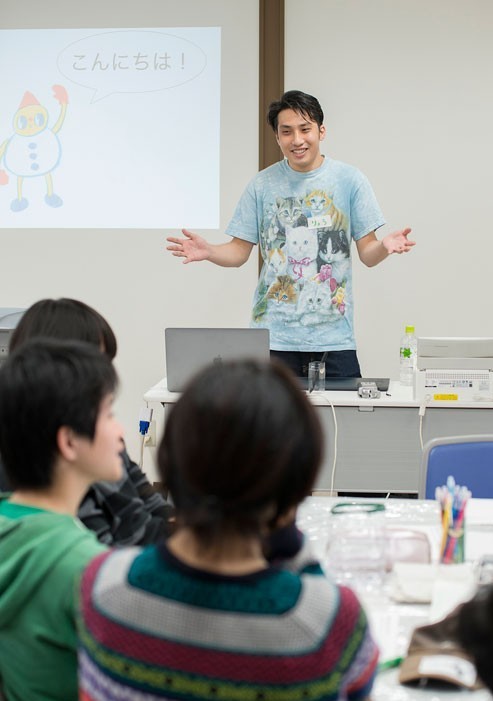 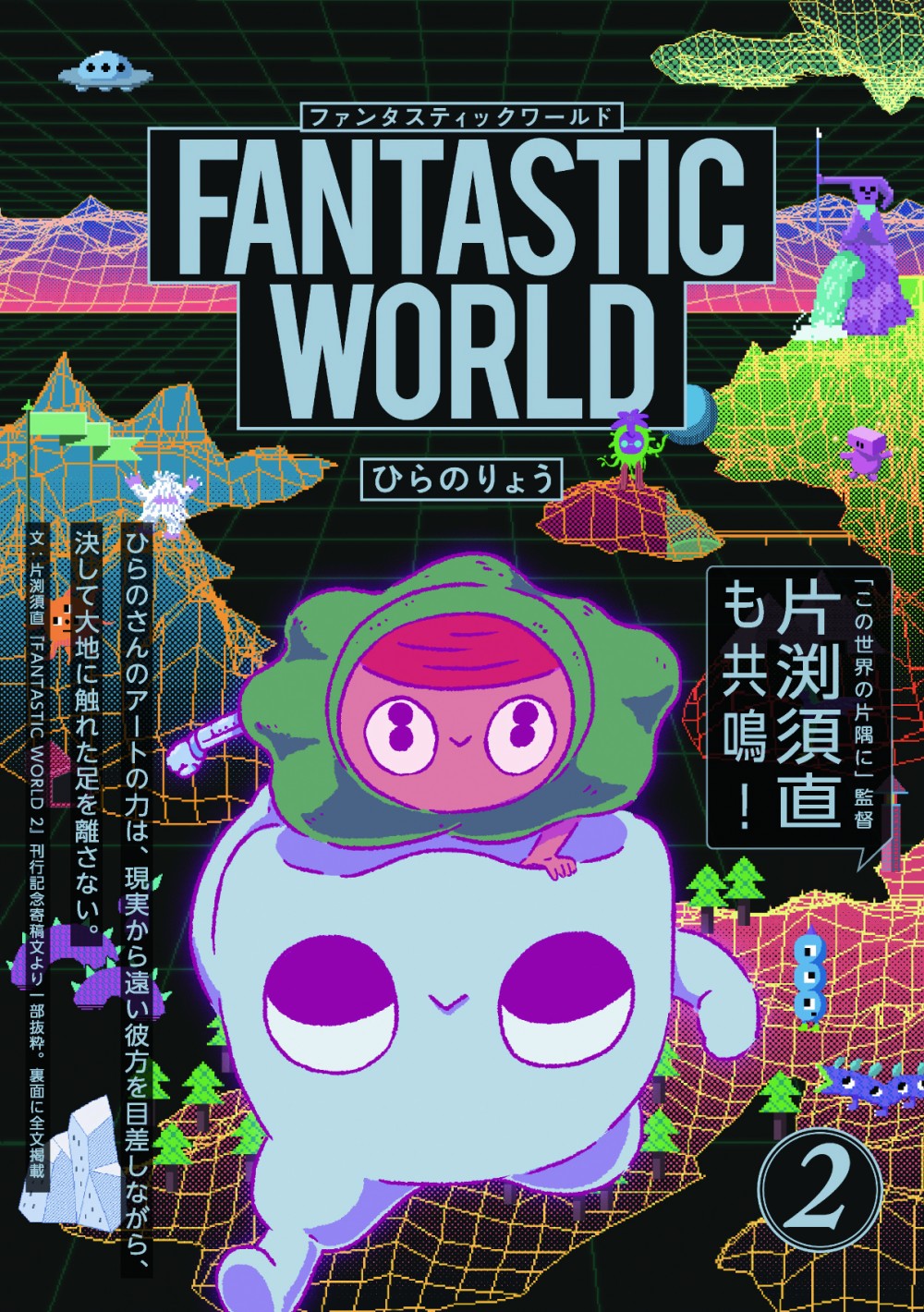 At the beginning of the workshop, after the children and adults introduced themselves, Hirano demonstrated the mechanisms that make the pictures move using a projector, and explained body movements and animation techniques in a way that was easy for the participants to understand.

He also shared his animated works and the projects he has been involved in, relaying to the children the sense of joy felt when completing a work as well as the challenges of struggling alone and the difficulties of finding creativity. 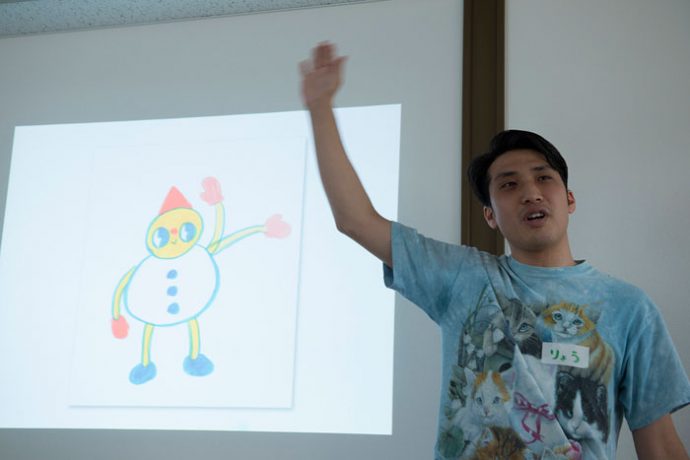 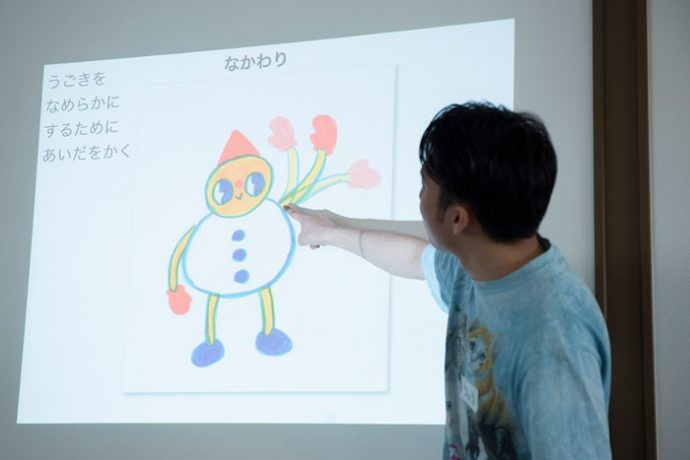 After the introduction, the children stood up and experimented with body movements. Once they had understood the mechanisms used in animation, the workshop began!

Using paints and colored pencils, the children drew freely on paper and expressed the characters and scenes they had imagined. The supporting staff were beside them, helping the children express their ideas through pictures and movements.

A boy who had a strong interest in the unknown world of dinosaurs and the deep ocean started to draw a submarine and gigantic deep-water fish as he imagined the world tens of thousands of meters beneath the water. The supporting staff asked him which color he would choose for the dinosaurs and if he would like to make them colorful. The boy replied to the staff with a comment full of affection for dinosaurs: “You must not belittle dinosaurs. We have to treat them with respect.” In this workshop, it was important that each child, regardless of their drawing skills, had the freedom to paint whatever they liked and do whatever they wanted. Worksheets were prepared to help the children imagine characters, and time was given to enable them to enjoy being creative, so that a child who liked coloring or a child who liked drawing trees and backgrounds could each enjoy doing so. What kind of cat shall I make? Photo by Takaaki Asai

One child drew slowly after thinking through their ideas while another child worked quickly, each creating at their own pace. One girl drew a cat, her favorite animal, paying great attention to the details in the patterns and colors. One boy who seemed shy and found it hard to make a start worked together with a staff member—a university art student—next to him, eventually turning each of his ideas into drawings. 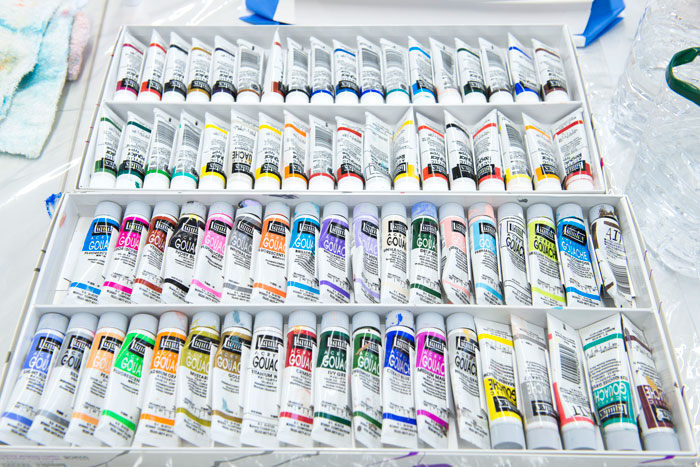 Favorite colors were chosen from a wide selection 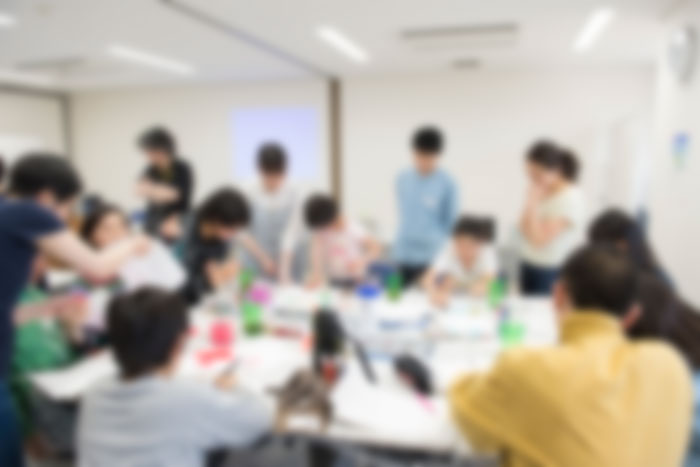 Some showed their pictures to the person next to them, or consulted with people around them

A boy who depicted a red Mount Fuji and an apple enjoyed drawing while confidently using colors, differentiating between red and pink gradations. He became friends with the staff member next to him, and worked intensively while filled with anticipation to show his completed animation. Once the pictures were finished, they were left to dry completely Photo by Takaaki Asai

One girl erased and repainted her pictures several times, filling the whole surface with her distinctive composition. Children could be seen waiting in line to use the light box Hirano had prepared to make it easier to trace the pictures, consulting with Hirano as they traced in a last spurt to finish their pictures all at once. Some children also carefully considered how to create smooth motion, add lots of subtle movements to their pictures while comparing them one by one. 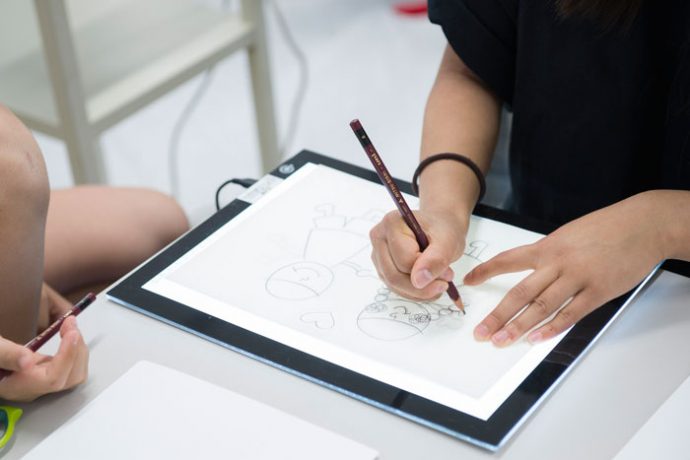 Movement is added by tracing the pictures using a light box 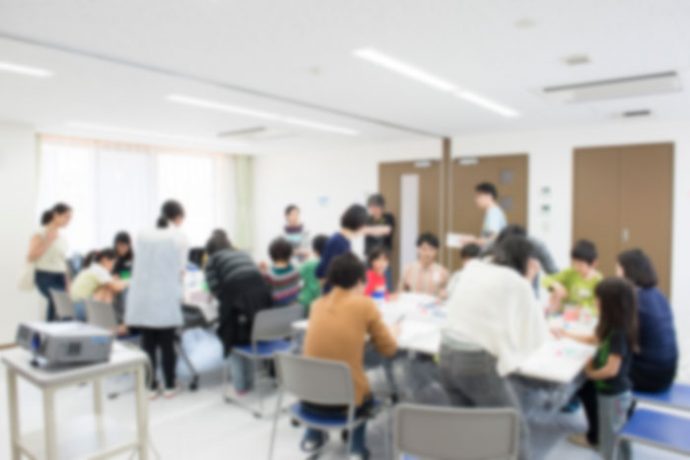 Those finishing first scan their images, and it’s almost time for presentation Leaving the pictures to dry, Hirano scanned the drawings into the computer in the order that they were completed. One by one, the characters drawn by the children appeared on screen and started to move. This made everyone cheer! One child appeared very shy at first when their drawings were scanned and animated, but when the drawings were projected they looked content.

For this workshop, AIT staff, students of contemporary art school MAD, and students of Musashino Art University located in close proximity to Futaba, participated as facilitators.

Let’s watch the animation we made together!

The completed work of the participants was screened a month later at the event, Haru no Futaba Fes (Futaba Spring Festival) held in Futaba Musashigaoka Gakuen, which was open to the surrounding community. The children watched the completed work together with members of the community and child-support organizations, as well as with the event participants. The event was attended by Ryo Hirano who enjoyed being reunited with the children.

Being raised by parents who worked at schools for disabled children, Hirano had a strong interest in providing a learning experience for the children. Here is the comment from Hirano.

It had been a truly rich experience to work with the wonderful personalities and creativity of the children who participated.
Ryo Hirano

Masahiro Takemura, a coordinator at Futaba Musashigaoka Gakuen who helps the children gain social independence, introduced the environment that the children experience there at an event held at AIT after the workshop. Futaba Musashigaoka Gakuen is proactively working to organize irregular dance and music classes, as well as arrange visits to local farms and study tours to disaster-hit areas. In completion of the workshop, Takemura gave us a comment.

I hope these experiences of making connections with the surrounding community and other participants will facilitate the day-to-day growth of the children. Even if there is no immediate effect or the children cannot express easily in words, I hope they felt something from this experience.

The pictures and other parts created by the children in this workshop will be introduced together with Hirano’s pictures in an introductory movie about the project. After the workshop, I talked about art and children with a friend who had also participated. We both had childhood experiences that were different from those of other children, and both share the difficulty of getting others to understand what we went through. Art became our only means of expression, and it still serves to connect us with others while providing emotional support. After the workshop, we both talked passionately about wanting to show the children a bigger world even if only for one day, and to bring them to an environment in which they can do anything. We also talked about wanting to tell them there are countless choices in the world, and that love also exists there. We want to communicate that through art.

I felt that the children who participated this time expressed themselves honestly in their drawings, rather than being conscious about creating in a public space. For the children, although the art and drawing activities in this workshop took place in public, it provided a means of speaking their own language. While taking place in this “gray” area, I wanted the children to find a balance between output and input. I felt that it was invaluable to hold workshops inside a facility, as we did on this occasion. I was also moved by how Ryo Hirano laid the foundations for an exciting workshop, in which not only the drawings moved as animation, but also co-existed in one shared space.

At first, some children expressed a dislike for painting and seemed reluctant to take brushes in hand, or appeared bashful when they couldn’t think of what to paint on the blank paper in front of them. But with the help of the art university student who painted a shark as encouragement, each began to paint their own pictures while looking at that of the student’s, gradually adding colors and movements after being prompted with different questions. The children seemed to be very embarrassed about having their work projected onto the screen, but their faces lit up when the pictures they had painted appeared. The temperament of the children was such that they weren’t actively interested in the workshop from the beginning, but with encouragement from the adults around them they could be seen to follow the activity while thinking carefully about what they were doing. During the presentation that was held recently, the children sat right at the front and watched the completed animation with smiles on their faces.

The task of making something move by drawing the same picture over and over would be quite difficult even for adults, but each of the children worked at their own pace with great patience. Additionally, the illustrations used to explain the animation process at the start of the workshop seemed to make it easy for the children to understand. Ryo Hirano also has a friendly and approachable personality, so the children soon seemed to relax around him.

It seemed that the children liked (or were good at) painting pictures, and I was impressed to see them drawing while thinking carefully about what they were doing. At first, it seemed that things weren’t going in the way they had thought, and they would sometimes erase and then paint again while quietly working from the image they had in their heads. Some of the children consulted with Ryo Hirano while seated at the light box, and we could enjoy the scene of children lining up to work together with the staff in a bid to finish their pictures all at once. It was wonderful to see the unique ideas of the children, who cleverly thought of adding movement to a very difficult composition in which a multitude of characters run alongside one another.